Radius Benders is the leader in tube bending.  From the smallest jobs to contracts in the some of the biggest mines in Australia, we have been at the fore front of tube and pipe bending technology for a number of decades.

With Radius benders you can feel comfortable knowing you will get the job done right – first time.

We also offer a range of specialised equipment for sale.  Please check our new machines and used machines listings for more information.

The origins of Radius Benders go back to New Year’s eve of 1974 when a fitter and turner by trade from Austria became stranded in Brisbane because of a car breakdown, and needed to find work.

From this lowly beginning Radius Benders grew to become a well respected manufacturer of tube and pipe bending machines in Australia, at one time manufacturing over 10 standard models which are used in the exhaust, furniture, engineering and vehicle accessories industries to name but a few. Its expertise is in customizing its machines for its customers’ special requirements. It seems that no two customers have exactly the same needs. Radius Benders machines have been exported to countries as far as Mauritius and the United Kingdom, to countries in Asia and many outposts in the Pacific region.

As a result of rapidly advancing technology, the small Australian market and the local manufacturing costs, Radius Benders established a relationship with one of the most technologically advanced tube bending machine manufacturers in the world, Chiao Sheng Machinery Co (CSM) in Taiwan and since 2003, has been the sole distributor of CSM Tube bending machines in Australia and New Zealand.

In 1991, Radius benders came under new ownership with a team of more than 20 dedicated employees. During the 1990’s the owners of Radius Benders added the product lines of Top Line Concrete Tools, Botanic Niche, Funcourt and The Letterbox Man as associate businesses.

In addition to manufacturing and supplying tube and pipe bending machines and associated products, Radius Benders also undertake contract tube bending and fabrication, general engineering, and manufacture a number of metal parts and products for a variety of customers and industries.

Map of Our Location 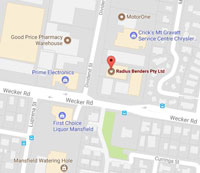